Verification
MARKED AS
Working
Not Working!
0
Working!
32
LAST VERIFICATION
Working 7 years ago
by

Indepth guide about all aspects of creating an Archer character, including Skills, Weapon, Armor, etc.

An Overview of Stats

NOTE: There is no stats that increase attack speed/movement speed

Though there are tons of different build for a character, they are mainly classified into 3 areas - Damage Type, Tanking Type and Hybrid Type

agi archer has extremely high damage hence excelling at backstabbing (pking ppl who are leveling without warning). But due to their lack of hp pool, they are easily taken down which makes them not as useful for guild fight.

Tank Type
agi CON ARCHER - pump your strength and agiterity according to the minimum requirement for light armor, rest of points into constitution.

agi con archer are perhaps what we can call a werebeast wannabe archer, they work well against wu xia which archer fear most. Though with a lack of damage, the main skill used by archer when killing wu xia are the thunder type skill since they are gold element attack (hence denying wu xia advantage of high physical armor). Those thunder type skill uses fix dmg hence reducing the penalty of low dmg.

By having a slightly higher con, it solves the problem of survivability issue in Guild Fight. It also makes it easier to survive when doing FB (Instance Dungeon) or normal leveling against magic-type mob due to the higher hp pool (Magic has 100% hit rate, rendering dodge useless). Damage as compared to a agi archer isn't that much of a difference.

Out of the 3 build, i strongly recommend the hybrid build. Reason is simply because damage is reduced by 75% when in PvP hence having a pure dmg build isn't really that wise. Considering the 2nd fact that most archer skill does fix damage + weapon damage and not percentage of weapon damage, this thus further reduce the advantage for having a pure dmg build. And for the 3rd factor, magic has 100% hit rate and archer that went demon path has 2 skill with 100% hit rate, making it more important to have hp pool

The chart below is the stats allocation for the hybrid type I recommended:

NOTE1: The equipment icon shown at the left side is the equipment you can get at that specific level. I used bow/crossbow/slingshot for weapons and light armor. For helmet, I used the heavy armor type (most of the time i wore helmet which were far lower than my lvl due to insufficient strength). For the misc. items, i used the defense type and for rings i used physical attack type.

Note 2: Most weapons for the 1st 20 levels are not shown since quest weapon are better. (the 3 bow shown are quest bow). Though at certain stage before you got your quest weapon there are weapons available to be bought, I strongly advise you to skip it since it doesn't really slow your leveling speed that much since you will only be using that weapon for like 10 minutes before changing to your quest weapon.

NOTE3: agi that i pumped are higher than the weapon requirement since there are a few sudden jump of agi at certain levels, if u had pumped those points to con at earlier stage instead, u will be lacking in stats point for your agi at those stage.

Normal Weapon (those bought from npc)

There are 3 type of range weapons in PW: Bow, Crossbow and Slingshot

For weapon choice, i used the quest bow for the first 20 levels, and change weapon to whatever range weapon i can get from from level 22 onwards. I only used slingshot up to lvl 58 (which is shown under the stats chart below) since the dps advantage for lvl 68 slingshot when compared to lvl 65 xbow doesn't outweights the penalty of 2 metre shooting range it has. This apply for slingshot beyond that level too.

Of course, archer can also use claw/glove which is the onli weapon with the closest stats as range weapon but I wouldn't recommend using claw simply cause it isn't really important once you hit level 13 and get your falling thunder skill.

For boots, try to get those that add movement speed.

For helmet, i chose heavy since there are onli 2 type for helmet (magical and heavy).

For cloak, there is only 1 type available.

For the type of stone to slot for armor, i chose hp stone.

NOTE1: Name of skill might different for Malaysia English Version.

Aimed Shot - This skill is worthless if you are going to level it. The damage it increase is lower than another skilled acquired at later stage: fatal shot which can be cast even faster than aimed shot. Though at earlier level, it is still useful, but if you had left it at level 1, it will be useful for pvp/pve later on. After casting it, press esc or cast the skill again. This will cancel your skill and cause an attack at a speed of 0.6 seconds (archer normal atk spd is around 1.6 secs). By using an attack like this, player can gain 10 combat points which is important for PvP and sometimes PvE. If u had pumped aimed shot to a higher lvl, the mana cost wouldnt be cheap. at level 1 all this bonus would be granted to you onli at a cost of 10 mana.

Double Shot - Damage increament of this skill is rather low, making it quite a worthless skill at higher level. But at the start of game with no other attack skill, Double Shot is really important. Getting it to level 3 is recommended since at the 4th level of this skill your character would be level 13 and Falling Thunder skill would be available. After changing to god/demon it would be quite a good skill to get since it has 50% chance to increase 20 combat points for god. And 50% chance to increase 30% aspd for 6 seconds, which makes archer shoot at a rate of 1.1 seconds on average per shot (original atk spd is around 1.6 seconds). Demon path would be much better for a agi archer who depends on normal attack. Max it after u hit level 89 and with excess gold/skill points.

Repelling Arrow - This is an extremely important skill for leveling and FB (Instance Dungeon). It has a 100% chance to knockback your target for 12 metre (provided ur skill didn't miss). In FB where monster are mostly packed together, FB can be used to drag 1 unit to you. When Repel Arrow strikes it's target, it pushses them back first then deal the damage. Therefore, the mob would only summon those around it's new position (the knockback-ed position) and attack you. This skill does not work against player. The skill dmg added is quite low and it has no other effect other than increasing the skill dmg when level-ed and also due to the lack of skill points, I recommend leaving it at level 1. Max it when you have excess gold/skill points after level 89.

Binding Arrow - This skill is important for PvP and PvE. It is meant to replace Ice Arrow. This skill cost 100 combat points in addition to it's mana cost. It has 90% chance to hold it's target and 100% when level 10 (need confirmation, this info was taken from the detailed chinese archer guide under my reference). This skill adds around 3.5k damage when maxed which is quite high. Recommended to pump whenever possible.

Fainting Arrow - The only skill that has stun effect for archer (Unless u chose god then binding arrow will have chance to stun it's target). Chance to stun is 45% at level 1 and 90% when max. Total casting time is 2.1 seconds and stun effect is 3 second, therefore not recommended for PvE usage. (quite useful for PvP). Max it after hitting lvl 89 when you have excess gold/skill points.

Fatal Arrow - One of the highest damage skill available to Archer. Total cast time required is 3.6 seconds but adds 5k dmg and 100% physical attack. Good skill for opening shot when leveling. When combo with Fainting arrow in PvP, it is 2 hit ko on most Priest/Fa Shi or Archer (if both skill hit and they are agi Archer). Recommended to pump whenever possible.

Arrow Array - The highest dmg AOE skill available to Archer it has a channeling effect. This skill is similar to an AOE skill fa shi has. This skill uses up 200 combat points and deals 4.5k dmg and 200% physical attack when max. From the chinese guide, they recommend leaving this skill at level 1 for leveling purposes and max it for PvP. I haven't tried this skill myself.

Falling Thunder - This skill does gold element damage (ignores target's physical defense). It does full damage even when in melee range, making it an extremely useful skill. Adds 2.2k dmg when max. Mana cost is rather high for this skill, try not to spam it like crazy when leveling unless money is irrelevant to you. For demon path this skill has 100% hit rate but skill delay increase by 2 seconds. Has 25% chance to increase 20 combat points for god path. Recommended to pump whenever possible.

Shocking Thunder - This skill is similar to falling thunder, even the dmg it adds is the same. Difference is a longer casting time (2.3 secs for this skill and 1.8 secs for Falling Thunder), reduce targets gold defense for 15 seconds (50% reduction when max). Although it reduce gold defense by 50%, this reduction only applies to equipment defense.
For e.g. A warrior has 40% gold dmg reduction, of which 30% comes from equipment and 10% comes from con/int.

When strike by a lvl 10 Shocking Thunder, gold def is reduced by 50%,

A gold dmg that deals 2k dmg would deal:

Hence dmg increment is only a mere 300 dmg. According to the Chinese site this skill has varied effect on mobs. Will test it out in the future.

Explosive Thunder - This skill never misses and does 3.3k gold dmg with a 8 metre diameter upon hitting target(might be radius still not 100% sure but if it is radius it is god damn huge). Casting time is rather long though , 3.3 secs. Recommended to pump whenever possible since it is one of the only 3 AOE available to Archer.

Thunder Bird - Does 11k gold dmg within 30 secs at level 10. It also reduce target's movement speed by 30%. Not a useful skill for PvE. Thunder Bird followed by explosive thunder and falling thunder in PvP is a good skill combo against archer, wuxia and werebeast. Recommended to max after lvl 89 when you have excess gold/skill points.

Flaming Arrow - adds 40% fire dmg when cast for 10 mins when max. Please note that the damage increased is NOT normal dmg, it is classified as fire element hence it has bonus or penalty against certain elements. The following is an example of the calculation.

Ice Arrow - Reduce target's move speed by 50% for 5 seconds at level 10 (3.2 seconds at lvl 1). Total cast speed is 1.6 secs which is quite fast. Recommended to pump whenever possible (can stop at lvl 5 and use binding arrow instead of Ice Arrow)

This chart is for easier reference on what level to learn what skill. It is basically all the skill that are coloured red on the previous chart. 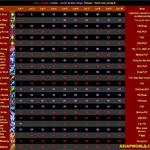