Verification
MARKED AS
Not Working
Not Working!
22
Working!
25
LAST VERIFICATION
Working 8 years ago
by

v0.22b - Fixed the periodic crash problem, and the resting while looting problem. Seems stable so far.

What does it do

(*The unstuck feature really sucks right now, but it works for the
most part. It's just something temporary until I get waypoints working.)

Seeing as it acts like a keyboard, and doesn't write any memory
(outside if its address space), it isn't detectable until they
specifically scan for it (meaning it doesn't throw any flags). If
people like this and use it, I may just package it in a root kit (like
Glider's shadow driver).

I hope you enjoy it.

Q - Autorun
E - Reverse View
Note: Make sure after clicking "On", that you make Aion the foreground window. 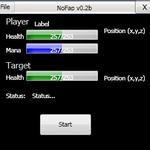